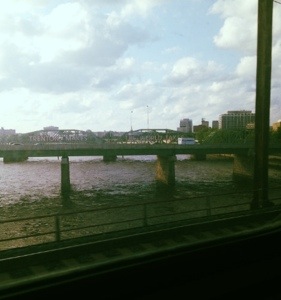 I’ve never had a car so I’ve never truly understood the luxury of going from point A to point B with little to no hassle. At least not as an adult. When I was growing up of course I had my mother and once I went to college I had friends who would offer rides. But even then I would feel bad asking, and then I’d have to wait on them or be ready at a certain and blah blah blah. It still was never as easy and getting in a vehicle and going where I needed to go. I did use public transportation but I did very rarely when venturing outside of the huge area surrounding my school. I picked my housing for the last two years almost solely on the proximity to campus. Every place I needed to get to on a daily basis was either within walking distance or required a less than 20 minute bus ride. And that’s only if the buses were late and there was a ton of traffic and they hit every single traffic light. That’s not so much the case now.

Today when I was out on another New York adventure, suffering from train service changes, I thought of something. I spend a lot of time on trains. A LOT. And so do most New Yorkers but holy cow! What a time sucker. I thought about this so much, (on my long train ride), I did math. And I hate math. So this shows you how important this was…or how bored I was.

Since I moved and started working in NYC I’ve always been about 30 minutes away from work. Sometimes more but never less. I, (minus the 2 days I remember having off for holidays), have worked approximately 68 days. Multiply that by an hour for round trip that’s (obviously) 68 hours OF JUST RIDING THE TRAIN. That’s almost THREE DAYS! And that doesn’t count the time walking to/from station or waiting on the train. AND that’s only for work. That in no way takes into account my weekend adventures or the times I was apartment hunting OR when I moved my stuff from Brooklyn to Manhattan by train. So I think it’s pretty safe to assume I’ve wasted a week of my life sitting on a smelly subway car. Definitely not the glamorous NY Life I envisioned.

4 thoughts on “TIMES A Wastin’”